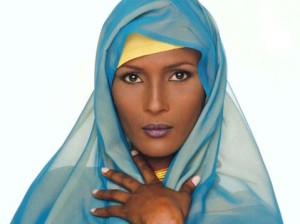 It was like a modern-day version of the famous Clark doll test from the 1940s. Back in the early 1990s, several of my cousins, a friend Melinda and I were hanging out in my aunt’s kitchen looking at a Victoria’s Secret catalog. That’s what women sometimes do: we page through catalogs of beautifully nipped, tucked, underfed and airbrushed women, and then we judge ourselves harshly by an impossible beauty standard. Or we decide we’re being silly and share a pint of ice cream. That afternoon, though, the conversation took a heated and serious turn.We stopped at a picture of a woman wearing a dark suit (with a low-cut neck line of course, because it was a Victoria’s Secret suit). She had a dark olive complexion, hazel eyes and highlights in her brown hair. The overall effect was that she looked like she was from North African descent, or her parents were from Somalia or Ethiopia, or at least she was of mixed heritage. While we checked out the rest of the picture and read the product information, Melinda blurted out: “She’s pretty, for a black girl.”

Of course, the whole room erupted into chaos. Pretty for a black girl? Ugh! There were so many things wrong with that statement, we didn’t know how to begin upbraiding her. But we did our best!

“So, black women are not normally pretty?”

“That’s the reason black women feel bad about themselves!”

“Whitey did a good job on you!”

Poor Melinda. I’m sure that in her mind, she only meant to pay that model a compliment, but it was clear that there was something in her thinking, and by extension our generation’s thinking, that needed to change. The Clark test said as much about our parents’ generation. In a study that shored up the case for outlawing segregation in American public schools, psychologists Kenneth Bancroft Clark and his wife, Mamie Phipps Clark used identical black and white dolls to gather compelling evidence that “prejudice, discrimination and segregation” (Library of Congress) caused black children to develop a sense of inferiority and self-hate.

One would think that black people had ditched those attitudes back in the 1940s. Yet here we were, supposedly modern black women, facing similar issues. How did Melinda learn to measure attractiveness in dark-skinned women, and why was the possession of light skin a prerequisite of their beauty? That model wasn’t even dark-skinned, but in Melinda’s mind, she wasn’t light enough to be considered pretty outright. Sadly, the prevailing attitude in a lot of cultures around the world, such as India, Latin America and the Caribbean, is that pretty women must have light skin, and if at all possible, narrow noses and straight hair. Sometimes that line of thinking takes a dangerous turn, as people from those cultures treat give darker skinned folks a hard time while revering the light-skin standard. I don’t know if Melinda changed her attitudes in the intervening years after that tumultuous afternoon catalog flipping, because we fell out of touch as we took different paths in life. If I saw her today and introduced her to Hubby, born in Wisconsin to parent of Scottish and German backgrounds, would she venture to remark about the ‘pretty’ children we would have one day — that is, pretty as far as black and biracial goes? Who knows? Maybe she has grown past all that by now.

At this point in my life, I am sure of one thing. I’ll do everyone a favor and steer my future sons, and especially my daughters, away from people who harbor those kinds of attitudes.

That man behind the shrub is Michael Alexander and he’s peeking at his lovely wife Bianca. They operate a company called Planet Media Inc., which puts on a weekly television program about environmentally conscious living, plus does planning and consulting work for “green” events. They were featured in an April 2008 feature story in Black Enterprise, about conservation-themed black businesses. Bianca appeared on the cover solo 😦 , but at least her hubby joined her for this beautiful inside picture. (I tried and tried, but I could not resize it any better than this.)

Anyway, the Alexanders are just a sampling of the freshest crop of black folk in the media taking a serious look at environmental issues.  I remember that the character Freddie from the college sitcom “A Different World” was the first black character who was passionate about ‘environmentalism’ ( a relatively new term back then) and other of-the-grid issues. Nowadays, it seems that every sistah and her momma have some understanding, even if it is basic, of the importance of recycling, conserving energy, etc. Even this prime time spitfire, Marshanna from The Bachelor was Miss Earth New York 2007! It’s the first I’ve heard of a green pageant queen. And of course, there is a purpose for singling out Marshanna on this blog.  She’s supposedly still in the running to get a rose from the latest bachelor.  Actually, I hope she’s not the one that the newest bachelor picks at the finale.  This show is cursed and I’m convinced that none of the guys appear on this show to find a wife. They just want to live out their fantasies of having a harem at their disposal. All of the couples—at least the ones where the man does the picking—either break up or fail to get to the altar in a reasonable amount of time. I would not like to see any sister suffer that kind of heartbreak in the national spotlight.

Finally, I want to try to explain why I disappeared for such a long time. Ever since February I’ve been SLAMMED with fatigue. I mean it’s like nothing I’ve ever experienced before. Just can’t get enough sleep. Between that and the other odd symptoms, like nausea, tender swollen boobage, and strange cravings, I think it’s high time I got solid confirmation of what I think is going on here. If there’s any news from the bakery, or our family is expanding, I’ll discuss it in due time.  (Someone put the brakes on the puns!!)