I was all set to congratulate Halle Berry and Gabriel Aubry on their second blessed event. But then I found this video, in which a stunning Halle (is this woman even capable of looking less that gorgeous? Ever?) dispels recent pregnancy rumors. So for now, it seems, there will be no second wave of unfair beauty born into the world, no second set of onesies, rompers, or burp cloths, either. I guess those best wishes will have to wait a little longer. Nevertheless, Halle has seemed very content for a long time, which is great. I hope that health and happiness continue to follow her and her beautiful family, wherever they go.

As far as I’m concerned, Summer 2009 never really happened. This odd solstice that we just experienced, with its soggy June and a few hot spots that interrupted the mildness of July and August, was an impostor. Phony baloney. I don’t feel like I had an authentic summer experience. I didn’t eat gallons of rum raisin ice cream, nor did I bolt out of the house in the mornings to walk or to garden. Not once did I go to the beach, and we didn’t even see any memorable July 4th fireworks.

And yet, we are told, we had a summer this year. As if to try to find some grain of truth in this scandalous falsehood, find some trace of authenticity of summer, I spent a little bit of time looking around the city (mainly during my commute to and from work) to get a few snapshots of everyday life that typified the seasonal experience in the New York area. Here is what I came up with. You all can tell me if, judging by the goings down that I saw, summer was actually here or not.

1. People groping the Wall Street Bull. This was almost sad. Day after day, as long as the weather was clear, this sculpture was surrounded by clumps of tourists or local yahoos, who thought it was funny to basically molest it in broad daylight. Now, I understand that the artist created an atomically correct statue, and people have probably been doing this since the bull was unveiled, but does that make it right? I don’t think so. Every day the scene repeated itself: yahoos like the ones pictured here, and even demure-looking young Asian women who probably lead otherwise respectable lives back home, would stop and cop a feel while grinning for the camera. Is this summer? 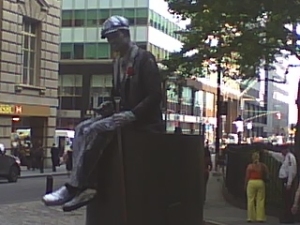 2. Performance artists. Okay, in New York City, serious artists come out on the street all year round, especially if the ground is clean and dry. Case in point: The well-dressed tin man pictured here. This guy was in the Bowling Green area a few times during the “summer” and blended in seamlessly with the metal pedestal he sat on, until I stared, realized he was performing and got a snapshot. He caught me snapping his picture on my phone and moments later, he returned the favor. LOL! Another encouraging sign of summer. We’re getting there.

3. Sweethearts walking hand in hand. I meant to catch this couple, tap them on the shoulder and ask them to say cheese for the camera. Really. I’ve done that before. But I couldn’t do that with this couple. They were moving too fast, and there was no way for me to catch up with them and pay them the complement of asking them, as an attractive couple, to say cheese for me and my little blog. So I snapped ’em like this. It’s a pity though, because they are a Latte Cafe kind of couple. Yes, a couple of sweethearts walking down the street hand in hand counts for summer.