So, we’re back to this again? Dismissing white male attraction to Black women as a form of deviance on their part? In my last post, I talked about my first impressions of a new TV sitcom called “Here We Go Again,” from TV One. The name of that sitcom sums up how I felt after reading this personal essay, “What Dating Abroad Taught Me About Stateside Racism,” on the Jezebel.com, and reader reactions in the comment section.

In the main essay, the Black female writer describes her experiences dating in the U.S., where she pretty much felt like a wallflower, in stark contrast with her experiences overseas, where she felt much more appreciated and attractive. It’s a wonderful essay, except for the fact that this apparently smart, engaging Black woman who is easy on the eyes, has accepted her wallflower status in the U.S. dating market because of the color of her skin. The author is obviously a smart and capable woman, at a level in her career that requires travel abroad. So I was aghast that, to shore up her point she cites the now-infamous and very unscientific OKCupid study claiming that Black women were the least desirable in its pool of online paramours; and he vile pseudo-scientific Psychology Today article written by a Japanese scientist asking “Why Black Women Are Less Physically Attractive Than Other Women.”

It only got worse in the comment section, where women frequently and flatly asserted that European men are culturally trained to assume that certain women, not just Black women, are sex workers, and that might partially explain some of the response she was getting while overseas.

So we’re back to the idea that attraction to Black women from men outside our race is a sign of sexual deviance in non-Black men? Because only very the rare European man dates outside his race with sincere intentions? It never occurred to the author that maybe these men were also attracted to her professional confidence.

In the essay, everything seemed to be tracking along with other experiences that I, and my other friends who have dated out, have had, until somehow her dating psychology swerved out of the confidence lane and into the oncoming traffic of a racist American society. I know it’s a personal essay, but the author never balanced the article by pointing to the fact that the Psychology Today article was debunked and wiped from the magazine’s Web site because it lacked any scientific grounding — and was cruel and offensive. Colleagues who rushed to defend the author spewed even more vile and racist assertions, like the need to look into the so-called fact that Blacks are more promiscuous, and Black males are more prone to rape white women! The OKCupid study was also effectively rebutted in several essays. And who really cares what a singer says about having a “David Duke cock” in an bizarre interview, anyway?

I hope the author has a change of heart down the line, I do. Her point of view is counterproductive, especially in an era when Black women are learning to should carry themselves with more confidence and come to each others’ rescue when an outsider tries to tear us down. We live in a culture that takes from us and shames us at the same time, and it’s a mystery that at a moment when Black women’s confidence is building, the author goes to a forum for white feminists to argue that she, as a Black woman, has resigned herself to a lower position in the dating marketplace. She might not be speaking for all Black women with that conclusion, but she should have found way to disconnect her thesis from her identity as a Black woman.

There is nothing inherently less attractive about our hair, not when white girls always cycle through toying with afros, cornrows, box braids and dread locks. Not when they’re paying money to get plumped lips, tans and fannies like ours. And we will inevitably dance and sing again in ways that other women will want to emulate.

The essay was also linked to Tumblr, where I first saw it, and in that thread, one writer, who claimed to be biracial, jealously added that her dark-skinned friend got most of the male attention overseas. Incredible! That ought to tell you that colorism among Blacks is still alive and kicking here in the U.S., if a biracial woman is so spoiled by the existing racist social construct that she can’t handle the shine her dark-skinned “friend” gets when they are overseas. I wanted to tell her, ‘Grow up, my dear. The sexual psychology of males is not, by evolution, creation or any other default, geared toward light-skinned and white women.’

I tell you what. Let’s stop playing defense against Fox News, the #BlackLivesMatter and #BlackGirlMagic detractors, Jezebel, and anyone else who has a problem with Black women coming into a critical era of greater self confidence. Why don’t we scrap the loathing of Black women and have an essay exploring the fraying egos of the certain people spoiled by an aberrant racist society?

A few months ago I started to wonder if Black women who discuss their interracial relationships online weren’t doing themselves more harm than good. It seemed like we could hardly post a blog, Facebook post, Tweet or Tumblr update celebrating our relationships without intense backlash and unfounded claims that we were “bashing Black men.”

I had hoped the drumbeat would die down, since Black women were not backing down from marrying out. Actually, the phenomenon gained steam. Also, independent think tank data, mainly from the Pew Center, suggested that Black women who married out were often just as healthy as any other woman in a stable, healthy relationship, so it seemed like “swirling” did us no harm.

But the hypersensitivity didn’t die down. In fact, it has morphed into full-on hatred. For reasons that no rational person will ever be able to work out, a specific strain of Black men have intensified their campaign of railing against an oppressive white regime, proclaiming that #BlackLivesMater, while instilling self-loathing in Black women. Incredibly, they begrudge Black women of the happiness they find outside their race! Their videos, crude artwork, photo manipulations and blog posts communicate one message: Black women of every educational and social background are the scourge of the Black race, and are the cause of its “downfall.” It’s not enough that they don’t want us, but they don’t think anyone else should want us, either. To them, it doesn’t matter if we are cut from the same cloth as Michelle Obama or relate more to “New York” of reality TV infamy. To them, we are all trash, and deserve to be reminded of that fact whenever anything, be it innocuous or really troubling, sets them off.

Also, I couldn’t help notice that they idealize women with brown, caramel, olive and white complexions. Remarkably, the one or two men who had the courage to show their faces on their troll accounts were often very dark-skinned, broad-nosed, coily-haired and thick-lipped Black men. What else could this content be but hypocrisy and a bit of self-loathing itself? 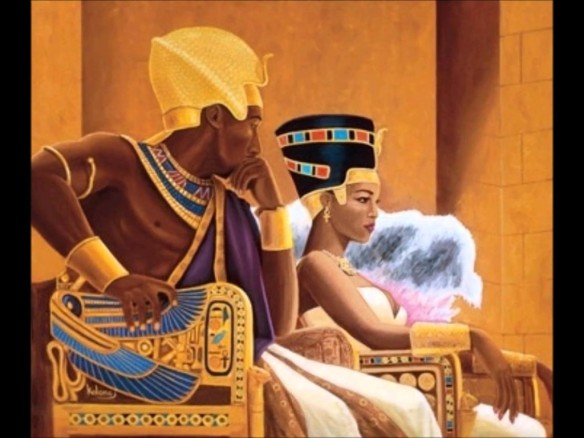 Notice that the ideal male ruler has a “chocolate” complexion, and his so-called Queen is significantly lighter and significantly softened Black features?

That’s when I gave up on trying to make sense of the pointed attacks that these men leveled from their cowardly social media troll accounts. I systematically began reporting all videos and channels with disembodied voices ranting about the evils of the Black woman, and then blocked them from my feed. That’s also when the word “misogynegro” came to mind. That type of character underpins what I call the hidden Third World in the Black community, and I define it this way:

Mind you, misogynegros don’t all subscribe to a specific pseudo-religious sect, hail from the same socioeconomic background, and they are not all straight. Several of the most demeaning misogynoiristic hate speech, be it public, private or online, come from gay or trans men. You’ll find misogynegros all over hip-hop, which is why the “Straight Outta Compton” movie phenomenon can miss me forever, no matter how phenomenally it performed at the box office. No narrative about the Black experience is so important to Black people that it can be allowed to ignore the degradation, brutal violence, blackballing and finally, abandonment that Black women endured to prop up Black men.

I have some theories about what might be driving this visceral hatred of Black women, and maybe it’s something I’ll address in another post. My point for now is that Black mothers need to prepare their daughters for the inevitable encounters with these guys. I don’t believe these guys are harmless, docile internet trolls. A video composed of a disembodied voice feverishly cussing out Black women dubbed over footage of boys wielding guns and smoking weed is a sign of a troubled mind, ready to blow. I would hate to see violence against Black American women to the point that it’s indistinguishable from what you hear of in oppressive paternalistic societies. Don’t think that gang rapes on a bus, honor killings or dowry murders is something only East Asians are capable of doing. We live in a society that has a cavalier attitude about violence on Black women. How long do you think that those fever-brained rantings will stay confined to the outback of the Internet before something happens on Main Street? Black women will need to learn how to either talk their way out of confrontations with these guys, or knock them down and run!