My YouTube subscriber list is a lot more than just a source five- to 10-minute videos to kill time while I wait for a train or wait in line to pay at Target. It’s an entertainment option of choice that seriously competes with television and magazines as a source of cutting edge cultural news and opinion.

So when I saw that I had a bunch of unwatched videos from Christelyn Karazin’s main channel, I clicked in and saw the headline “The End of Beyond Black and White.” (See below) I was alarmed: Had she shut down her blog?! The main Web site is a terrific societal hub of intelligent discussions about interracial dating and cute couples photos, of course. It turns out that the blog is still live and kicking – whew! In my view, as a writer, it’s a very good lifestyle e-zine that stands head and shoulders above similar Web content. It is updated regularly (unlike this one – mea culpa!) covers a range of smart topics, is attractively laid out, and is well written (a different blog with a similar mission was an early pioneer. Alas, the writing is impenetrable and the overall execution is poor). The Facebook page, sad to say, was shut down after it came under orchestrated attacks from readers who claimed that some of the content was offensive and derogatory against Black men. But those of us who have engaged in online discussions about anything from a cat video to Bobby Brown firing an imaginary gun at a reporter’s head while his superstar wife looked on – increasingly anguished and humiliated – can smell a troll a mile away.

I’ve had the chance to read the feed of “Beyond Black and White – The Rebirth,” and it doesn’t have to do much to strike a nerve with the militants and “handmaidens,” whom Christelyn mentioned in her vlog. I tried to read the feed objectively, and I couldn’t find anything objectionable about the group or what it posted. So apparently the people who forced Facebook to shut down the original page take extreme and irrational offense to any discussion boldly promoting the well being of Black women. And they are still waging their campaign of intimidation.

In what Bizzaro world do Black women deride Black men simply by accepting respectful treatment from guys outside our race?

On the feed, I read comments going back a day or so, and from what I observed, “derogatory” appears to be any statement or material in which Black men are not the hero in a Black woman’s story or the centerpiece of her world. What really galls the critics is when any Black woman happens to be showered with affection and regard from a man who isn’t Black, and when the failings of Black men (and there are many, in reality) are frankly and unavoidably identified as part of a situation that she overcame. I know the type; these are callous tyrants who care very little about Black women. They have come to believe that our rightful place is by their side – as their donkey lugging all their crap up the rough side of the mountain. They either don’t notice or care that Black women routinely squander their childbearing years either having multiple kids for men who repeatedly let the family down, and they do not give a second thought to the reality that Black women drift from the bloom of youth into spinsterhood waiting for an IBM who never arrives. I’m certainly not begging for the approval of Black men, or their love or their sloppy seconds. But going a single day without their scorn heaped on my kinky curly head would be nice. So along comes a voice – and an intelligent, appealing one, too – that encourages Black women to get the best out of life, and all of a sudden the ones who treated us as an afterthought just can’t live with that?

I wasn’t a member of the old “BB&W” Facebook community, simply because I didn’t know it existed. And to be honest, I didn’t want to politicize an area that I feel should be treated with levity and humor. When you look at the raw numbers from studies that attempt to measure the well-being of Blacks or women or both, startling findings emerge: Black women have been heroically holding the line for a long time in our community, but after a generation and a half of denying ourselves the full social and economic rewards of our loyalty and hard work, it looks like Black women are actually in danger of being left holding the bag. As much as I sympathize with Black men for taking the brunt of police brutality and economic marginalization in American society, they haven’t given us the best of what is in their power to control. Black women are not building wealth like we should, not living the healthy lives that we should, and we lack the richness of family life that we deserve, and part of that has to do with sacrificing or neglecting our potential out of blind loyalty to Black men. People like Christelyn are trying to enlighten and strengthen Black women to change those realities – even if they firmly want to datewithin their race. It’s unfathomable to me that anyone would object to our self-improvement, unless of course they enjoyed wiping their feet on Black women’s backs, as if we’re doormats, and saddling us down like beasts of burden. They’ve got a good thing going with this oppressive regime, and they are not about to give up that power. 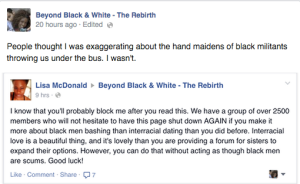 ANY statement encouraging Black women to improve the quality of men they date and marry WILL be taken as an insult to Black men. Any woman making such statements will be harassed by the hordes of militants and handmaidens. Got that?

I wrote in a previous post that I was skeptical about the Swirlr Web dating show. Part of me still does side eye any deliberate effort to “date out,” because I think it should happen naturally, or under specific circumstances unforced. But I have always respected the core of Christelyn’s work, her basic thinking, and I’ve never been able to watch a good Black women get steamrolled by a tyrant. I can’t now. Black women are just beginning to learn to claim their blessings, and no deranged, insecure Web bullies are going to censor that again.