One of the greatest aspects of living in North Jersey is its multiculturalism. You don’t have to try very hard or go very far to run into people of every description. Integration helps us to coexist as we are, without the pressure to stop calling ourselves Black, white, mixed, Asian or what have you. Someone should have explained that to Rachel Dolezal, the Caucasian woman who just resigned as the president of the Spokane, Washington chapter of the NAACP.

A lot has been said about Dolezal’s racial confusion since last week, when her parents revealed that she is white, with no Black ancestry. Writers and pundits keep on raising the question of what it means to be Black or Caucasian. Is this Blackface? Can she fairly be compared to Caitlyn Jenner? Poppycock to all of it! Rachel Dolezal’s dogged insistence on identifying as Black undermines our efforts as a society to achieve harmonious racial coexistence, and that is the real issue.

White America (I said it, now deal) has a shameful, dark past of extreme cruelty and depravity toward Blacks and Native Americans, in particular, which was driven by greed, a false sense of white superiority, and racial hatred. That history cannot be denied. When minorities began to organize themselves and resist these forces, they had to face the reality that, as minorities and people who are not omnipresent or omnipotent, they needed to strike partnerships with whites who had a strong moral compass, and who could help spread the message of the need for freedom and justice. That’s how the NAACP came to be, when it was founded by Blacks and whites in 1909. White abolitionists, and later white civil rights workers dedicated their time, talent and treasures to the work, and often risked their lives. But that did not make them Black, and when Blacks began to earn money, found schools, relearn their own histories, reclaim and expand on their own histories, and move into the Middle Class, it did not make them white!!

In an interview with Matt Lauer on the Today Show, Rachel mentioned the fact that at one point, she obtained full custody of her Black adopted brother Isaiah, and that since he called her “Mom” at that point, she couldn’t plausibly be seen as white and be his mom!! That is what set me off.  Zahara Jolie-Pitt, who was born as Yemsrach in Ethiopia, plausibly has white parents, and white and Asian siblings. Ask Halle Berry and Paula Patton, both of whom identify as Black, about their Caucasian mothers, and how those wise women helped prepare them for certain racial realities as they went out into the world. Dolezal’s statement completely undermines the idea that Americans can be different racially and culturally, yet move past the surface and embrace each other and relate to each other as human beings. 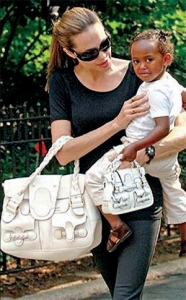 More has come out about Dolezal’s past, which undermine her imaginary Blackness, including a 2002 lawsuit that she filed against Howard University, alleging discrimination against her because she was white. Not Black or a woman, but white. I refuse to watch this deceiver derail a much-needed conversation about race in our country and confuse my daughter as she discovers her identity.

Yesterday I read Baby Girl a newspaper story about flooding in the republic of Georgia, which resulted in zoo animals escaping their pens and roaming the streets of the capital. This is a reading family, a thinking family, and I cannot imagine what Baby Girl is going to think after gets a load of this lady!