While flipping through Flickr, I came across this antique photo of what appears to be an interracial American couple. They seem to be well to do, judging by the smart cut of his suit, and her fashionably billowy sleeves. And she made sure to tell her ladies’ maid, or whoever assisted her, to do her best work on the hair. OK? 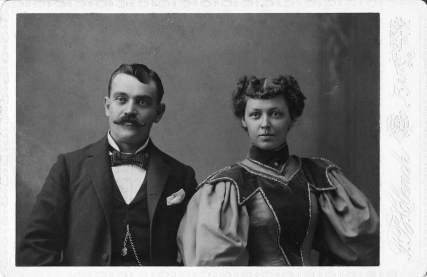 Little did they know that one day couples like theirs would flourish in America!

The question is: Are they a mixed couple, and is she Black? Certainly her facial features suggest a strong influence of a Black parent or two grandparents. And we know plenty of dark-skinned people with fine, even thin, facial features. The Flickr caption notes that the previous owner of the card described the woman as an “African American beauty,” but it is not clear how the photographer, F.B. Clench, described them. The curator didn’t think it was clear that she was Black, but no other suggestion was offered. Her hair looks silken, but beyond that I don’t see anything that puts her African descent into question. Her eyes remind me of Ethiopian and Eritrean women I’ve met and regularly see around town or at church. Was she descended from Ethiopians? It is hard to say, since commerce and missionary relationships between the U.S. and what was called Abyssinia at the time was very light. Who knows if Abyssinians had established their networks here in the U.S. and intermarried by 1889 and 1898, when the photo was taken.

In any case, they look wonderful, and I took special note of their posture and smiles. They actually look relaxed, like they wanted to be there and get their money’s worth. They are leaning toward each other, touching, and they even seem aware of the camera, and what a remarkable occasion it was to have their portrait professionally done. Unlike a lot of the other facial expressions you find in Victorian-era photographs, middle-and high-class people frozen in hard-bitten stoicism, stiff and awkward, as if taking a picture was an alien experience and an imposition. I wouldn’t want to be remembered like that for all time. These fine folks are dressed to the nines and happy to be there! Thumbs up.