I decided from the jump not to introduce a lot of angst into my interracial relationship, or make growing up biracial a special burden for my child. While a successful and well-adjusted life depends as much on how the outside world treats us as how we react to it, I took steps to ensure that everyday life is as full of as much positivity as possible. 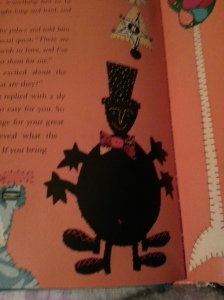 Anansi, from a library book on African folk tales.

It’s working. And I have a clever little spider named Anansi to thank for part of it. I started reading stories, very small ones to my daughter almost as soon as I felt her kicking!It started off as a way for me to have something to say to her all the live long day. (I was really excited to become a mother, as you can probably tell.) After she was born, the reading choices ballooned from modern classics like “Goodnight Moon,” to global folk tales to classic children’s stories to contemporary American fare. When she was a baby, reading became an essential ritual to help fertilize her mind for learning. We wanted to cultivate a thinking and feeling child, who would be capable of logic and spirituality. We didn’t want her to be in the army of vacuous automatons who go through life not really doing much, and who are practically numbed to her own existence. Worse still, numbed and inert to an existence higher than themselves. And yet we didn’t want her to be overwrought, either.

Folk tales are helping big time with that. We learn about Africa, Jamaica, and the diaspora of blacks in general. And it’s all pretty much fun for us, because we’re doing it through the hi-jinx and pranks of a clever little creature. I kind of wondered how baby would react to stories about a spider. Would she recoil, frightened and put off, or approach them with fascination? None of the former happened, thanks to the fact that my daughter loves animals — all of God’s creatures, even the creepy crawly ones. And we also read “Charlotte’s Web,” which helped promote good spider-child relations. 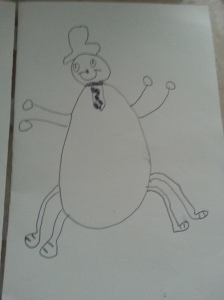 My daughter’s rendering of Anansi, inspired by her library book.

Those stories opened the door to other tales, like “Mama Panya’s Pancakes,” and “Summer Jackson, Grown Up.” When I attended the Circle of Sisters with a friend last October, I picked up a paperback in a series of books about the adventures of two Jamaican boys, Mark and Markus. And recently Hubby’s family in Seattle sent my daughter three books from the “Anna Hibiscus” series, about a little Nigerian girl growing up in Africa. So it’s all snowballing from there. When I was growing up, we had to make special efforts to find nicely bound books filled with African tales. Modern tales about Black kids doing everyday things were a little more scarce. I’m relieved that it’s easier to find the stories these days, so that my daughter will know her mother’s background and culture is just as accessible and inviting as her father’s. Even if Mommy “stands out” in all the family pictures. (Oh, yes. There’s a story about that, too.)