For once, I'm happy to be a packrat. 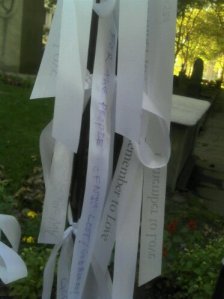 More than 11 years ago, on St. Valentine’s Day, I started my commute home from my magazine job in Manhattan. I headed toward the World Trade Center, marching past the clumps of sleek and fashionably dressed people rushing to their restaurant reservations. Some were headed home to change into even more stylish ensembles for the evening. All the while, I silently ranted about my curmudgeonly boyfriend.

“Everyone else is in the mood for St. Valentine’s Day, but not him,” I mumbled. And then I sank into a miserable reverie. Hubby, then Boyfriend, had effectively driven all hopes of a nice St. Valentine’s Day out of my mind, with his disapproving speeches about what a “marketing vehicle,” St. Valentine’s Day was. Just another excuse for celebrity worship; a chance to foolishly try to emulate them; an occasion to separate people from their hard-earned money. So instead of maybe eating out in the city that evening, I would head back to my little apartment in New Jersey, and he’d go back to his walk-up in Brooklyn. It was just another evening.

There was no doubt about it. My boyfriend was the Grinch of St. Valentine’s Day. Then I savaged the guy in my mind. He’s the biggest grouch who ever lived! Every other lady with a significant other will be getting flowers today. But not me, oh no! I have to be content with a lousy phone call, at 9:30 pm, as usual. And why can’t he ever wait until after “Girlfriends” or “Half & Half” or whatever other Black sitcom that might be on that evening wraps up before calling me? It’s bad enough I get bupkus on St. Valentine’s Day, but to interrupt my Me Time, too?! Ugh!!

I tramped into the station, and practically tore my train pass out of my purse as I headed to the turnstiles. Then I stopped. There he was, standing in front of one of the gates, with gifts for me. He held a bag from Crabtree & Evelyn and a bouquet of the prettiest pale pink French tulips. No one had ever given me presents like those before. People all around us looked as I walked up to him, gave him a kiss, and he gave me my presents. He explained that he really did have a lot of work to do, and needed to go back to Brooklyn, but he wanted to give me something nice for St. Valentine’s Day. In usual Hubby fashion, he went into some detail about conversations with the sales ladies and other patrons at the Crabtree & Evelyn shop, and at the florist. But he didn’t tell me what was in the Crabtree & Evelyn package.

Who cared about them, anyway?!

I was holding the best St. Valentine’s Day present ever. From the world’s nicest boyfriend. He wasn’t a Grinch, he was a prankster, that’s what he was. Had me believing I would go home empty handed while every other sweetheart at least got something. When all along, this was coming. After another long, warm hug and a smooch, I traipsed onto my train. Everything was so pretty around me. People on the train admired the gifts. One woman told me that French tulips are very rare, and told me how to cut, arrange and water them to extend their lives. More than a year after later, the whole place was a massive crime scene, the site of nearly 3,000 murders.

From Canada, a country whose citizens opened their homes and hosted stranded Americans during a no-fly order over U.S. skies after the attacks.

Everyone else is commemorating the World Trade Center today by remembering the victims of the attacks 10 years ago. But none of my friends or relatives died in any of the Sept. 11, 2001 attacks anywhere. My way of remembering was to just leave money at St. Paul’s Chapel, across the street from the site. I’ve enjoyed the building and grounds, so why not? When I walk the perimeter of Ground Zero each day during my commute, I remember what the site used to look like, and the role it played in my everyday life. I frequented the concourse shops, covered press conferences and banking conferences on the site, right up until one month before the attacks. Hubby and I once had dinner at the Windows on the World, and I had a job interview at a news service on one of the upper floors of the south tower. As I rode the high-speed elevator to the company’s offices that day, my ears—and everyone else’s—popped as if we were on a jet liner taking flight. Being in the World Trade Center carried that mystique, of being on really important business or mingling with a crowd that seemed to exist on a higher social plane than those in my everyday life.

I heard a commentator say this morning that with the 10th anniversary, Americans will begin to put the memories of that day—the passenger jets striking the buildings, of the streets below being filled with falling buildings and plumes of poisonous smoke—into an historical context, instead of a recent trauma. For me, the attacks 10 years ago have already passed into history; a living, instructive history that admonishes me about monstrous dangers lurking in our world. I watched the remnants of the first plane smolder in the first tower that day, from my workplace in Rockefeller Center, then panicked like everyone else as we watched the second plane strike, only to learn that the Pentagon had been hit, and another airliner had crashed in a field in western Pennsylvania. That transformation started when I stepped onto a ferry with hundreds of other New Jersey commuters, and watched the smoky remains of the north and south towers drift across the harbor as we made our escape from the island. It is hastened by the architecture of the new buildings, whose jagged angles slightly convey shattered glass and splintered lives.

Posted from WordPress for Android