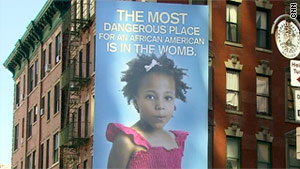 Like most Black women everywhere across the country, this story had me engrossed in the morning newspaper. An advocacy group called Life Always hung a three-story billboard on the side of a building in SoHo, New York City. It screams: “The most dangerous place for an African-American is in the womb.”  Unfortunately for us, this billboard does the job and tells the truth. We can squabble about what the real leading causes of mortality are among African-Americans. But facts—incontrovertible facts—push an uncomfortable truth right into our faces. Black women in this country have some of the highest abortion rates compared with women from other racial and ethnic groups. Take a look at some of these numbers from the Guttmacher Institute.

Thirty-seven percent of women obtaining abortions identify as Protestant and 28% as Catholic.

Women who have never married and are not cohabiting account for 45% of all abortions.

About 61% of abortions are obtained by women who have one or more children.

Forty-two percent of women obtaining abortions have incomes below 100% of the federal poverty level ($10,830 for a single woman with no children).

Twenty-seven percent of women obtaining abortions have incomes between 100-199% of the federal poverty level.*

The reasons women give for having an abortion underscore their understanding of the responsibilities of parenthood and family life. Three-fourths of women cite concern for or responsibility to other individuals; three-fourths say they cannot afford a child; three-fourths say that having a baby would interfere with work, school or the ability to care for dependents; and half say they do not want to be a single parent or are having problems with their husband or partner.

It says we are often unprepared for motherhood, or for an additional child, for one reason or another. If we took the time to get to the root cause of high abortion rates among Black women, then all of the peripheral comments that inevitably froth up at a time like this—about a woman’s choice, and how Christian groups should not force their opinions on others—will fall away. As they should. The real issue here is not whether a Christian group is crossing the line of decency and respect by publicly pointing out statistics. It should be: Why are so many Black women aborting their children? Where are the Black fathers and support systems to help her carry that responsibility? Are the support systems being strained beyond their capacity? Shouldn’t more Black women wait until they are educated and self-sufficient before getting pregnant?

I respect all sorts of family units. It is not my style to condemn anyone for not getting the ring, wedding, house and babies in that order with one man only until they die. Inevitably, well-meaning men and women on the street, bloggers, or whoever will say that no group should try to override a woman’s right to choose. My counter argument is this: Blacks are annihilating themselves with these rates of abortion.  If women want to be really empowered, wouldn’t it be better to try to make better choices about their lives leading up to the positive pregnancy test? Choose responsible, stand-up men as partners. Choose to avoid pregnancy for as long as it takes to get a degree, a comfortable apartment and money saved. After that, the way a woman chooses to structure her family unit is between her, the man and her Creator.

One last thing: African-Americans are not the first to have their abortion secrets aired publicly like that. India and China have had longstanding practices of discarding baby girls through infanticide and abortions, mainly due to cultural preferences for boys and population control. This has been discussed at length in documentaries, national newspapers, magazines and even dramatized on television. As societies, they had to talk about their ugly truths, and will be doing so for generations to come. Would it be so bad if Blacks shone a light on our own issues and cleaned house a bit?

You’ve probably seen the offending billboard by now. If not, here is a link: Metro – Uproar over abortion billboard.