Baby and I both got new hair styles last weekend. I got a simple touch up of a perm that had significant thick new growth, and I took Baby to a children’s hair salon to cut her hair.

Yes, I finally gave in. I simply didn’t want to see anymore patchiness along the sides of Baby’s hair or in the front. So, in the interest of giving her locks a fresh start to even out, I took her in to hare everything cut off.

The salon where I took Baby occupies a converted first floor of a brownstone on Halsey Street in downtown Newark, cheerfully decorated in vibrant primary colors, where two owners braid, cut, ponytail and do just about anything else mothers want for their daughters (and sons). There are two styling stations and a couple of dryers. Too cute. About a third of the floor space is dedicated to retail, where they sell colorful tutus, sportswear, accessories and other adorable finds for little kids.

After settling Baby into one of the two styling chairs and snapping on her apron, I expected the hair dresser to use clippers. I didn’t know if I wanted her hair shaved all off all the way down to her scalp, but I thought clippers would have been able to handle Baby’s four inches. But the hairdresser slid her fingers through Baby’s downy, fine hair and said: “I’m not putting clippers into this baby’s hair. It’s going to totally change the texture.” Her co-owner agreed, and predicted that were clippers to be used in Baby’s hair, her new growth would be a challenge to manage. She kidded that I would rush back in after a few weeks holding Baby and say: “Do something with this hair!”

So we decided to just go with shears. Baby handled the process a lot more calmly than I imagined she would. One of the salon owners daughters offered Baby a Spider Man board book. Baby turned through the pages, but started to become unnerved. Then the little girl fetched a pink teddy bear, which she had created at Build-A-Bear workshop. Smiling, Baby accepted and hugged the little ambassador. Before long, however, Baby started whimpering and trying to climb up on me. I managed to get her to hang in there until at last, her new haircut was done. 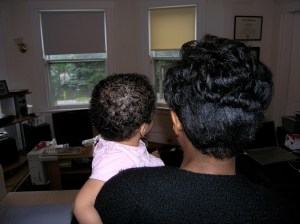 I think she looks adorable, and her short curly afro (with the slight ducktail in back) complements her perfectly round head, plump cheeks and long eyelashes. I understand where other women are coming from when they decline to cut their daughter’s hair, or gave me plenty of alternatives to this route. But Hubby and I thought Baby’s hair started to look lopsided, and felt that her scalp needed a breather, a time out.

After this, Hubby and I will probably part ways when it comes to managing Baby’s hair. I don’t know if I’ll ever cut her hair again this drastically. I don’t want strangers mistaking her for a boy, classmates at nursery school or beyond taunting her or Baby herself to feel like a cherished possession was taken away from her. Little girls tend to love their hair, and this is something that I have to constantly remind Hubby about. He thinks hair styling is frivolous. I showed him the Beads, Braids & Beyond Web site, expecting him to marvel at all those creative hairdos, and he recoiled. He said making a little kid sit still for all that styling was torture. I told him to get a grip on reality and understand that even if sitting still is a pain, a LOT of little girls enjoy getting their hair all done up, and like the results. He just huffed and puffed and shook his head, calling it stupid. And I just told him to can it, and that little girls are not middle-aged curmudgeons who don’t care about their hair. They want to look nice, and as long as they’re not obsessed, there is nothing wrong with it. And I told him to stop being so hysterical and calling black hair styles “torture.” Really!

Well, he’s in for a rough time, because Baby is an adorable little girl. She is also young enough that we can reasonably expect her hair to thicken up to a texture much closer to my densely cropped mane than his. It’s not hard to imagine that she will attract lots of offers to get her hair braided, curled, pony tailed and whatnot to play up her pretty face. Besides, after I buy her those colorful tutus, it just follows that she’ll need to rock a cute ‘do to go with it!