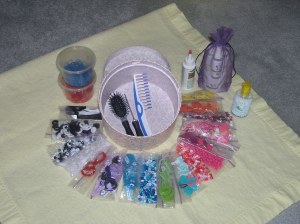 Normally, Hubby and I disagree about the amount of effort that should go into styling Baby’s hair. I think it’s essential for her to look cute and presentable at all times, and as you can tell from the photo of her hair supplies, I take this responsibility at least halfway seriously. This will pretty much be the extent of what I can manage, although it’s nothing compared to the system that Nikki over at Beads, Braids & Beyond has come up with.

Hubby is not as interested in styling Baby’s hair as I am. On the few occasions when I’ve left the house early for work and left her morning grooming to him, I’ve come home to look at her outfit and hair and wonder, ‘Why does Baby look like a hobo?’

But we do agree on one thing: Baby’s hair has failed to recover from the rapid thinning that I discussed a few weeks ago, and something should be done about it. Hubby was holding Baby the other day before settling her in her crib when he looked at her head and asked me when we were going to cut her hair. I muttered something that sounded like, “After Easter. I want her to have some hair for Easter pictures.” You heard me right. I am considering cutting off all my daughter’s hair and giving it a fresh start. Her receded hairline is not responding to her new regimen. I lightly brush shea butter and judicious amount of infant and toddler hair care products through her hair. I rub it onto her scalp. I’ve cut back on washing it, and I avoid over styling it. I leave it loose at times, just putting clips in the front or a headband, and sometimes I let it fly free with no ornaments at all. Those are Afro days, and I try to dress her in an earthy-looking outfit to match. But her hair is still very thin on both sides of her head from the front right up to her ears.

I know what you all must be thinking. Black women cherish their hair and want it to grow. Why in the world would I cut off my daughter’s locks? It’s a big deal for me, too. When Hubby first suggested it, I thought he was totally clueless and I think I told him to go soak his head! But I’ve been asking around about this, and what I’ve found is that several women from various cultures swear by it. There is the African-American hair dresser who did it to her daughter, a Dominican salon owner who heard it from an Argentine and then shaved her baby girl’s head, and an Indian woman who said her mother, apparently following a Brahmin Hindu tradition, cut her hair. In all cases, she little girls were between one and two years old, just like Baby, and their hair began to grow back quickly and thicker than it had started out.

The African-American hairdresser told me that her daughter, who is not biracial, had sparse, thin hair for a while, despite her efforts to cultivate it and get it to grow. After she shaved her head, it grew back long and thick, and she showed me before and after photos of her darling girl. The Dominican hair dresser said it corrected her daughter’s receding hairline. The Indian woman said it is customary for those girls to have their heads shaved shortly after they turn one.

So women all over the world do this, it seems. But only Black women have been skeptical about it. Most of them tell me not to worry, to give Baby’s hair time to transition and recover naturally. One friend from church said to forget those other women, because it only worked for them. When Hubby and I had friends over for dinner on St. Valentine’s Day and I brought it up, Little Sister and her friend Selena shook their heads. Selena was a little wide-eyed and said if I cut Baby’s hair, it might grow in weaker and thinner. Little Sister flat out says ‘Don’t do it!’

But I’m at the point where I’m tired of seeing strands come out in Baby’s wide-toothed comb. In the tub. On my clothes. On her clothes. Her hair is not falling out in clumps, but I still hate to see it everywhere. I feel like breaking a cultural taboo and trying what women all over the globe have done for their daughters—start afresh. And if those tales of thick, wavy new growth are true, I might just have to get more hair ornaments for Baby’s new mane!

3 thoughts on “The Trouble with Tresses”