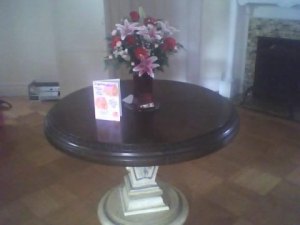 This morning I came downstairs to chop and marinate two chickens for a casual dinner party, when I glanced over at Baby’s high chair. Little Sister had tied two helium balloons to her chair, and propped up an oversized greeting card on the seat. How sweet, I thought, Baby’s first valentine! But it was not to be, because later that morning the balloons scared Baby so much that she ran shrieking away from them in terror!  Her face contorted into the most anguished pout, she scrambled out of my lap and she darted around the table toward the kitchen. She refused to be in the same room with them. We couldn’t believe it.

We rounded up the balloons and tied them to a plant stand in the living room, near the window. On the way out to church, we passed a neighborhood friend and told her about the incident. She says her son reacted the same way to helium balloons when he was very young, too. The day was not a total waste, however. Baby dug the bouquet that Hubby got for all of us. She never once looked at the lilies and roses suspiciously.

Hubby informs me that while he was holding her and trying to raise the blinds in the living room, Baby still tried to get away from him and the balloons! And later in the day, he was showing her around his bookshelf and she recoiled at the sight of a small ceramic clown. I guess this means skipping an elaborate first birthday party for Baby, with balloons and clowns and things was a good idea after all.

1 thought on “My Funny Little Valentine”