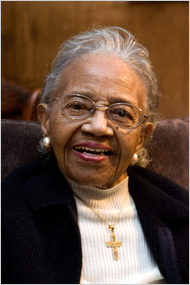 If you watched President Barack Obama deliver his election night victory speech, you might remember the story he told about Mrs. Ann Nixon Cooper, an African-American centenarian who lived through vast changes in American history, and who notably lived to vote in an election wherein a Black (and biracial) man was a very strong contender for the office. She lived to see a Black man elected president of the United States! This cannot be understated, because this was the same country that for much of her youth had withheld her basic human rights. I am always impressed with people of Mrs. Cooper’s generation, who endured many hardships, but did not allow themselves to be destroyed by the kind of racial hatred that was directed at them for so long. It sounds like she was one of those people who left this world better than they found it. Mrs. Cooper and others like her had to fight to get American society to recognize their inalienable rights, but it was worth it. She lived to see America grow and change. I hope that by the time she died, she was more heartened than distressed by what she saw in modern American society, and that she felt we were ever more enlightened.

In his words, President Obama issued this statement on Tuesday about the passing of Mrs. Ann Nixon Cooper:

“Michelle and I wish to express our deepest condolences on the passing of Mrs. Ann Nixon Cooper. From her beginnings in Shelbyville and Nashville, Tennessee to her many years as a pillar of the Atlanta community, Ann lived a life of service. Whether it was helping to found the Girls Club for African American Youth, serving on the board of directors for the Gate City Nursery, working as a tutor at Ebenezer Baptist Church or registering voters, Ann had a broad and lasting impact on her community.  I also understand that as a wife, mother and grandmother, Ann was a source of strength for her entire family, and that she always put them first.

Over the course of her extraordinary 107 years, Ann saw both the brightest lights of our nation’s history and some of its darkest hours as well. It is especially meaningful for me that she lived to cast a vote on Election Day 2008, and it was a deep honor for me to mark her life in the speech I delivered that night. It was a life that captured the spirit of community and change and progress that is at the heart of the American experience; a life that inspired – and will continue to inspire – me in the years to come. During this time of sadness, Michelle and I offer our deepest condolences to all who loved Ann Nixon Cooper. But even as we mourn her loss, we will also be rejoicing in all that she meant for her family, her community, and so many Americans.”